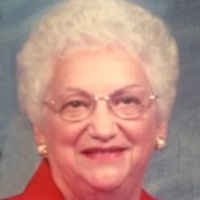 The Mass of Christian Burial will be at 11:00 a.m. on Tuesday, January 29, 2019 at the Catholic Church of St. Peter with visitation beginning at 9:30 a.m. Burial we be at Calvary Cemetery. St. Peter Funeral Home is assisting the family.

Margaret was born on December 21, 1929 in St. Henry, Minnesota to Joseph and Helen (Moudry) Regenscheid. She graduated from Cleveland High School in Cleveland, Minnesota. On October 12, 1950 she married LeRoy ‘Jim’ Miller at St. Mary’s Catholic Church in St. Peter. They were happily married for 67 years.

Margaret loved to garden and surrounded herself with flowers. She loved to bake her family’s favorite – kolaches.  She was known for her beautifully decorated cakes and her tasty breakfast breads but her real joy was baking Grandma Cookies with her granddaughters. She served on the St. Peter Catholic Church Funeral Committee for nearly four decades. Margaret was an avid Twins fan and followed every game on television or radio. She was a very proud grandmother and beloved aunt to her 90 nephews and nieces.

Margaret is survived by her son Dale and his wife Claudia of Fairfax, Virginia; two wonderful granddaughters Winnie (Troy Vernon) of San Francisco, California and Alissa of New York, New York; her sisters-in-law Marie Miller and Leona Miller of St. Peter and Betty Regenscheid of Mankato; and many nephews and nieces. She was preceded in death by her parents; her brothers Joseph, Lawrence, Leonard, Walter, Francis, and Charles; and her sisters Catherine Gostomczik and Helen Pettis.

To order memorial trees or send flowers to the family in memory of Margaret M. Miller, please visit our flower store.