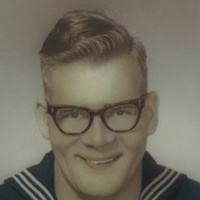 Gerald “Jerry” Gene Wiljanen passed away on January 7, 2019, surrounded by his children at the Minnesota Veterans Home in Luverne, Minn. He was 78.

Jerry was a U.S. Navy veteran (1961-1965, USS Bigelow), a retired Aerospace computer hardware engineer, an avid huntsman and gun enthusiast, and a lifelong fan of the Minnesota Vikings. He was born in Virginia, Minnesota, on October 15, 1940, three months premature, and he beat the odds to grow into a hulking man at 6’1” tall and upwards of 200 pounds. In 1966, he married Monika Linnea Lindqvist of Pargas, Finland, whom he’d met when she was an exchange student at Virginia High School in 1960. The couple initially settled in St. Paul, then relocated to Redondo Beach, California, where he worked in the aerospace industry for 25 years. He coached his children’s Central Redondo Little League baseball teams and was a longtime member of the Lutheran Church of the Good Shepherd in Torrance, California. When he and his wife divorced in 1993, he returned home to Minnesota, where he was a member of the Oakdale Gun Club and a daily presence at Cal’s Pizza Kitchen in St. Paul. In 2007, he moved to Everett, Washington, to live near his grandsons before returning to Minnesota for good in 2016. He’d been a resident of the veterans home in Luverne since March 2017.

He is survived by his daughter, Ursula Lindqvist, of St. Peter, Minn., and her husband, Remo Alexandri, of Fairfax, VA.; his son, Joel Wiljanen, and his wife, Heidi, of Sammamish, Wash.; two grandsons, Benjamin and Luke Wiljanen, of Sammamish, Wash.; a granddaughter, Anabelle Alexandri, of St. Peter, Minn.; three sisters, Jeannette Bergman of Ft. Myers, Fla., Shirley Tresler of Blaine, Minn., and Debra Sakrison of Cohasset, Minn.; and many nieces and nephews.

He is preceded in death by his father, John Edwin Wiljanen; and his mother, Elsie Viola (Kantola) Wiljanen, of Virginia, Minn.

A committal ceremony with military honors is set for 11:30 a.m. Thursday, January 10, 2019, at Fort Snelling National Cemetery, where he will be buried. In lieu of flowers, please consider a donation to the Dementia Society of America. St. Peter Funeral Home, 507-931-2750, www.saintpeterfuneralhome.com, is handling the arrangements.

To order memorial trees or send flowers to the family in memory of Gerald Gene Wiljanen, please visit our flower store.