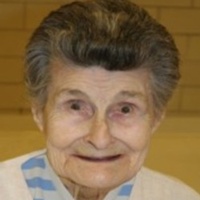 Louise Mary (Beer) Johnson, of St Peter, Minnesota, was called home by the Lord, at age 92, on November 19, 2018, from Shakopee, MN, where she spent her later years with her daughters.

Louise worked at the Nicollet County Bank and First National Bank of St. Peter.  In 1951, she joined Harris at Fort Rucker, Alabama where his unit was stationed as a training unit for other National Guard units that were being deployed during the Korean Conflict. They returned to St. Peter in 1952, where they remained and raised their family.

Throughout the years, in addition to raising her family, Louise worked at Sunny Side Floral and St. Peter Floral, Cook’s Mink Farm, Cargill Corp. of St. Peter in research and development of corn seeds, and Spors Catalog Warehouse in Le Center. In 1965, she began working at the St. Peter State Hospital, as well as attending classes to become an LPN.  She worked night-shift as a Psychiatric Nurse and Technician until 1992 when she retired to care for their oldest son who suffered a brain injury from a fall. Louise was also a member of the Catholic Daughters, and the American Legion Auxiliary and VFW Auxiliary.

Louise was a woman of great faith, who also displayed endless patience.  She had a heart of gold and was always willing to help others. She was a very kind soul. Louise was a strong, hard-working, dedicated woman who planted a smile where ever she went.  She was also a cancer survivor, who battled hard to beat the odds.

Her hobbies were sewing, crafts, gardening and growing flowers, photography, and volunteering at Cutty’s resort in Iowa where she and Harris were members. She loved visiting her relatives, traveling, camping, building and tending to campfires. Louise and Harris loved dancing!  She also enjoyed playing cards and games, especially with the grandchildren.  Louise treasured time with her grandchildren and great-grandchildren.

Louise will be laid to rest at Fort Snelling National Cemetery in Minneapolis, MN with her husband.  Burial will be at a later date.

To order memorial trees or send flowers to the family in memory of Louise M. Johnson, please visit our flower store.