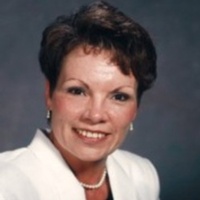 Mary Jane Borrell (nee Forbes) passed away peacefully on September 30, 2018 at home.  Mary Jane was a beloved wife, mother, grandmother, sister, and friend.  She was a strong woman of faith and attributes this to her Catholic schooling and upbringing which laid her foundation for life.  She was born August 11th, 1944 at home in Ruscomb, Ontario, Canada to Raymond and Grace (Nee Bissonnette) Forbes.  Mary Jane is survived by her brothers, Stan (Cecile) Forbes, two sisters, Cathy (Len) Guilbeault, and Elaine (Rob) Macintyre, and brother-in-law Tim Shanahan.  She is preceded in death by her eldest brother, Joseph, brother Chuck, her sister Isabelle Shanahan, and her husband Mike.

Mary Jane took pride in being part of the power and strength that keeps America going.  She was a 20 year military wife.  Her first marriage ending during the Vietnam era left her with two blessings…a dedicated son and a dedicated daughter.  Mary Jane is survived by her son Tim (Angela) Litzinger and daughter Cheryl (Greg) Degges.  Grandchildren Zach, Eliana and Hannah Litzinger, and Lisa, Marika, Nikita, John, Tiffany, Zack, Dustin, Taylor, Mary, Sacred, Elijah, Rihanna and Kingston Degges. She was preceded in death by granddaughter, Marika Degges.

In 1975 Mary Jane married Mike Cahill.  In 1990 his life ended after a terminal illness.  They resided in St. Peter for the most part after his retirement from a Navy Career on Submarines.  Another blessing…Colleen Cahill, sister-in-law, sister, and a diamond friend.  She is survived by numerous nieces and nephews and sister-in-law Ann Cahill.

In addition to supporting her husband’s military career, Mary Jane was employed by and retired from the State of MN, Rehabilitation Services.  She was active in her Church through Eucharistic Ministry to Hospitals and Mass and teaching Catechism classes.  One of her most rewarding “volunteerism” was Hospice through Immanuel St. Joseph’s in Mankato.  Mary Jane was an avid reader, walker, and enjoyed classical music.  Her favorite time during her life was being a mother.

Mass of Christian Burial will be held 11AM on Friday, October 12, 2018 at St. Peter’s Catholic Church (West, 1801 Broadway Ave, St Peter, MN).  Visitation will be held two hours before Mass.  Interment to follow at Calvary Cemetery in St. Peter.

Arrangements coordinated by Messinger Mortuary, Scottsdale, AZ and St. Peter Funeral Home- Klein Chapel in St. Peter, MN.  In lieu of flowers memorials to local Hospice appreciated.  As well, Dan and Mary Jane are financial supporters of the Catholic Community Foundation in St. Paul, MN.  Donations can also be made in Mary Jane’s memory to this foundation.  Donations will support the education of those attending St. Mary’s Parish in Waverly, MN, as well as the St. Paul Seminary.

To order memorial trees or send flowers to the family in memory of Mary Jane Borrell, please visit our flower store.