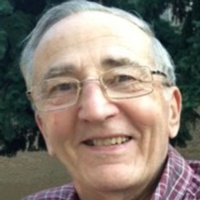 Robert J. Fossum, age 81, of Mankato, died on Monday, September 24, 2018 at Pheasants Ridge in St. Peter from complications of Alzheimer’s.

Mass of Christian Burial will be held Friday, September 28, 2018 at 11:00 a.m. at Immaculate Conception Catholic Church, St. Clair.  Visitation will be Thursday from 4:00-7:00 p.m. at St. Peter Funeral Home and will continue one hour prior to the service at church.  Burial will be at Immaculate Conception Catholic Cemetery, St. Clair.  Memorials are preferred to St. Clair School Foundation and VINE Faith and Action.

Robert was born on February 1, 1937 in St. Clair to John and Sadie (Miller) Fossum.  He graduated from St. Clair High School in 1955.  Robert earned a Bachelor of Science degree from Mankato State University in 1959 and earned his Masters of Science degree from Mankato State University in 1967.  Robert served in the United States Army from 1957-1963.  Robert married his high school sweetheart, Mary Lou Hoppe on December 28, 1957.  Robert was a teacher, coach, and principal in St. Clair from 1959-1968.  In 1968 he became Superintendent of the Henderson Public Schools until his retirement in 1991 from Henderson/Le Sueur.  Robert was a member of the Lions Club, MASA, and the MN State High School League Board of Directors.  Robert was a lifelong sports fan, three sport athlete in high school along with playing baseball in college.  His love for sports continued throughout his life.  He favored the Vikings, Twins, and Gophers.  Although, his favorite team was whichever ones his grandchildren were playing on. Papa will be sorely missed by all of his grandchildren, he was truly one of a kind.

Robert’s family would like to thank Joan and Jerry Stahlberger for their care, love and support of our dad.

To order memorial trees or send flowers to the family in memory of Robert J. Fossum, please visit our flower store.