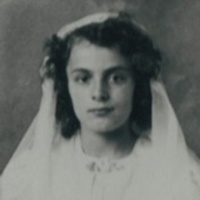 Cathy was born on February 12, 1932 in Derrynane Township, Le Sueur County to John Sr. and Helen Holtz. Cathy was one of nine siblings, all of who preceded her in death.

In life she was employed as a waitress for 5 decades, working at many iconic restaurants in the St. Peter and Mankato area. She tried retirement, but missed the interactions with people and went back to being a waitress until she was unable to continue.

Cathy was active in the St. Peter Catholic Church and was a member of the Catholic Daughters. She had been a member of the Degree of Pocahontas (Red Men Club), the American Legion Auxiliary, and the Mankato Elks Lodge.

Cathy loved spending time with her family and friends. She enjoyed gardening until she was unable to do so. She prayed the rosary until nearly the end of her life. These things all brought her joy!

Cathy is survived by two sons, Kenneth Gansen (Cheryl Guentzel) and Kevin Gansen, numerous grandchildren, great grandchildren and many others who she felt were part of her expansive family.

The family wishes to thank the staff of the Benedictine Center of St. Peter for all their care for the past 10 years.

Arrangements are being made through the St. Peter Funeral Home. There will be a private memorial service at a later date.

To order memorial trees or send flowers to the family in memory of Catherine "Cathy" Hanson, please visit our flower store.