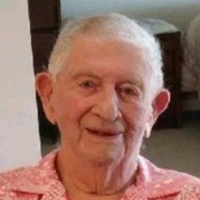 Memorial service will be held 11:00 a.m., Saturday, July 14, 2018 at St. Peter Funeral Home, 906 North Washington Avenue, St. Peter with visitation one hour prior to the service. Burial with Military Honors will be at Greenhill Cemetery in St. Peter.

Bud was born to Henry and Lillian Gilbertson on April 29, 1921 in Traverse Township. He farmed there with his brother, Glen until 1982 when he and his wife, Gayle, moved to Lake Ida.

Bud served as a sergeant in the 545 Quartermaster Corp in Korea during 1946 and 1947 and was a 50+ year member of the VFW. He married Gayle Groebner on January 4, 1969 in Mankato. They spent over 35 years wintering at South Padre Island. Gayle died in 1999 and Bud moved to St. Peter.

Bud is survived by a stepson, Bill (Arvis) Groebner and his family as well as many nieces and nephews. He was the last surviving Gilbertson sibling having lost the following brothers and sisters: Glen Gilbertson, Roy Gilbertson, Marge (Henry) Schaefer, Jean (Henry) Cuddy, and Mary Lou Wenger.

His family will remember him as a kind and gentle man.

To order memorial trees or send flowers to the family in memory of Lyle "Bud" Gilbertson, please visit our flower store.