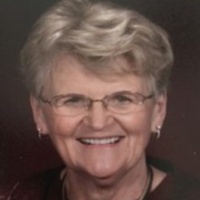 Memorial Service Celebrating Dolores’ Life will be held at 2:00 p.m., Monday, July 9, 2018 at Trinity Lutheran Church, St. Peter. Visitation will be one hour before service at the church. Private family interment will be in Resurrection Cemetery, St. Peter. St. Peter Funeral Home is assisting with arrangements. Memorials are preferred and will be distributed to Meals on Wheels and St. Peter Hospice.

Dolores was born March 19, 1929, in St. Peter, to George W. and Ruby (Strand) Davies. She graduated from St. Peter High School. Dolores married Benjamin C. Holteen in St. Peter, on August 24, 1951. Dolores was a lifelong member of the St. Peter community and Trinity Lutheran Church. Dolores was a devoted wife to Benny and a role model for their 4 daughters. When the girls were young, Dolores was active in the Oshawa garden club and a 4-H project leader. She was an accomplished seamstress and taught all of her girls to sew. Weekly, she baked yummy yeast breads, cakes with frosting and cookies. Dolores managed the family’s enormous garden overseeing the planting, caring, harvesting, canning, and freezing a variety of fruits and vegetables. She showed award winning vegetables at the Nicollet County Fair. Dolores helped Ben on the farm with milking cows and raising chickens. As the girls grew up and moved off the farm, Benny sold the cows and retired from farming. At that time, Dolores sought employment at Onan and ADC in St. Peter for 13 years. After retirement, she volunteered at the Nicollet County Historical Society, Reruns, Meals on Wheels, church, and cared for her friends in need. She and Ben enjoyed woodworking, hand carving and painting loons and fish. From her Norwegian heritage, She shard the making of lefse with her daughters and “treated” the family to lutefisk during the holidays. She enjoyed fishing with her dad, uncle, brother, Ben, her girls and her niece Cathy, well into her 80s. She enjoyed traveling with family and friends. After Ben’s passing in 2002, Dolores sold the farm buildings and built a home in Windsor pond where she enjoyed playing cards and having bonfires with her neighbors and lunch with the Oshawa ladies. In 2016, she moved to Heritage Meadows. She had resided at Benedictine since May 2018.