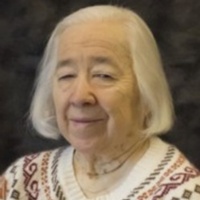 Funeral service will be 11:00 am Saturday, April 7, 2018 at St. Peter Evangelical Lutheran church with visitation one hour prior. Burial will be at Woodlawn Cemetery, St. Peter. In lieu of flowers, memorials may be given to the church or a charity of the donor’s choice.  St. Peter Funeral Home is assisting the family.

Ruth was born October 21, 1928 to James and Gertie (Knopf) Eiserman. She was baptized and confirmed at St. Peter Evangelical Lutheran Church. She attended country school District 49 in Le Sueur County for 8 years and graduated from St. Peter High School in 1946. She then attended Mankato Commercial College taking courses in machine and bookkeeping. She was employed at Donaldson’s Department Store in Minneapolis and later at the Anoka State Hospital.

Ruth married Robert Carter on July 7, 1948 in St. Peter Evangelical Lutheran. She returned to St. Peter in September of 1948 where she was employed at the St. Peter Regional treatment Center from 1949 until retirement on June 30, 1987.  Ruth was a member of the American Legion and VFW Auxiliary.

Ruth is survived by her son Jim Carter of St. Peter; sister Lorraine (Irving) Koponen of Brooklyn Center, MN; sisters-in-law: Joann Eiserman of Lakeville and Rella Eiserman of Robbinsdale. She was preceded in death by her husband, parents; two infant daughters; and brothers Ray and Al.
To order memorial trees or send flowers to the family in memory of Ruth Carter, please visit our flower store.