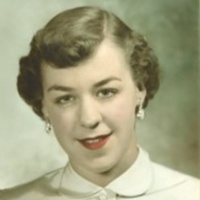 Memorial service will be 11:00 am on Saturday, March 3 at Our Savior’s Lutheran Church in Cleveland with visitation at 10:00 am. St. Peter Funeral Home is assisting Thelma’s family with arrangements.

Thelma was born September 5, 1934 to Dwight and Helen (nee Dunker) Bond in Jackson, MN. She grew up in Alpha, MN and graduated from Jackson High School in 1952. She met and married David Ferguson on June 4, 1955. They enjoyed the friendship of many neighbors while living in Avon, SD; Madison Lake, MN; and Cleveland, MN.

Thelma worked as a café waitress and later as a bank employee in Alpha. She enjoyed helping neighbors by setting and styling hair. Thelma later worked at Cleveland Public School as a lunchroom and playground aide. Her true calling was working at the St. Peter Regional Treatment Center for 26 years. She developed many close friendships with coworkers and her residents and their families on the units she was assigned. Thelma was a member of Our Saviors Lutheran Church and taught release-time classes and served on the funeral committee. Thelma was a member of Cleveland American Legion Auxillary.

To order memorial trees or send flowers to the family in memory of Thelma Faye Ferguson, please visit our flower store.