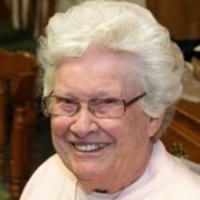 Renee G. Jackson, age 94 of St. Peter, died Monday, January 22, 2018 surrounded by her children at the Benedictine Living Community in St. Peter.
Memorial service will be held at 11:00 a.m., Saturday, January 27, 2018 at First Lutheran Church in St. Peter with Rev. Ted Kunze officiating.  Visitation will be one hour prior to the service at the church. Remembrances can be left for the family at www.saintpeterfuneralhome.com.  In lieu of flowers, the family requests that memorials be made to Global Health Ministries.
Renee was born on July 9, 1923 in Beresford, SD to Robert and Myrtle (Kindlund) Odeen.  She grew up in St. Paul and then attended Luther College in Wahoo, NE, receiving her associate degree.  She worked as an assistant to the president at Augustana Seminary in Rock Island IL where she met Elder Jackson. They were united in marriage on August 22, 1946 at Arlington Hills Lutheran Church in St. Paul.
Renee and Elder moved to Wheaton, MN where he was pastor and where they started their family. They then served as missionaries in Tanzania and Kenya, East Africa from 1949 until their retirement in 1985. During that time, Renee served not only as a pastor’s wife but also did bookkeeping, auditing, and secretarial work for their synod and a school for Missionary children.  She also taught sewing, cooking, and bible classes at the Bible school where Elder taught for many years.  They then moved to St. Peter where she continued to take an active role in the congregation. She always took great pleasure in having her family around her and enjoyed needlework, reading, cooking and travel.
Renee is survived by her children: Dean Jackson of Coon Rapids IA, Joel (Susan) Jackson of St. Peter MN, Beth (Jim) Crawford of Indian Harbour Beach FL, Kim (Birdie) Jackson of Waverly MN, Martha (Anthony) Mascarenhas of St. Peter MN, Deborah (Paul) Andros of St. Peter MN, and Jill (Scott) Grill of St. Peter MN; 19 grandchildren; 32 great-grandchildren; sister-in-law, Marlene Odeen; also many nieces, nephews, other relatives and friends.
She was preceded in death by her husband Elder in 2008; daughter-in-law Tricia (McGill) Jackson; an infant son; and siblings: Marilyn West and Leonard Odeen.
To order memorial trees or send flowers to the family in memory of Renee Jackson, please visit our flower store.