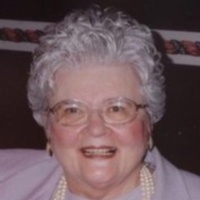 Died at the Benedictine Living Center in St. Peter on January 4th 2018.

Carol  was born August 18th 1927, to Norma & Edward Johnson.  Her father Eddie, was the editor of the St. Peter Herald and a rising figure in Minnesota politics and journalism. He died young from peritonitis in 1935 and her mother opened a dress shop in St. Peter.

The depression years were pretty lean for a single mother with five young kids, but like many other families, they made it through as best they could.  In 1941 Carol’s mother Norma, remarried and she and her new husband, George MacKenzie, went into the real estate business together.

After graduating from St. Peter High School in 1945, Carol went to work in the Johnson Overall Factory as well as holding a variety of secretarial positions at various companies in town. In 1950, she and some friends were at Red Vogt’s tavern on South Minnesota Ave. She noticed a cute guy playing cards with some buddies at one end of the bar. Her friends convinced her to break the ice, and on April 5th 1951 she and Martin Menk Jr. were married. They raised a family of three.

Martin started Bolton & Menk Engineering & Land Surveying with his partner John Bolton, and Carol kept the company books in the early days. She always remained very active in her husband’s business, working hard to develop the marketing tools and social connections that are so important in the success of any small town company. Her “Tom & Jerry’s” at the company Christmas Party were legendary.

In her mother’s housing development & realty firm, the MacKenzie Agency , she worked for a number of years as the interior designer for many of the homes that agency built in town.

She was active in many other areas as well: working long hours over many years with the League of Women Voters, heading a number of surveys in the 1970’s to ensure that the local schools were in full compliance with expanded state regulations,  establishing the first pre-school program in St. Peter, establishing the first Red Cross Blood Bank in town, working on the committee that changed the old “Capitol Days” celebration into the “Old Fashioned 4th of July Celebration” that is still in place, and chairing the county Swine Flu response efforts in the 1970’s. Gustavus Adolphus administrators described her as “indispensible” in connecting the college to the community, particularly for the Gustavus Library Associates, of which she was a charter member and a leader in organization and fundraising efforts.  She was also very active in the Church of the Holy Communion, heading the committee to remodel the parish hall, starting the first Sunday school and becoming one of the first women elected to a leadership post on the church vestry.

In 2007 she received the St. Peter Woman of the Year award. In the long list of her work for the community, the citation for that award noted:

“What makes her story unique is the breadth of her skills and her creativity in applying them while raising a family and managing a household at the same time.  Her important contributions laid the groundwork for the advantages professional women enjoy today. Carol is a descendant of one of the founding families of St. Peter and The Church of the Holy Communion, St. Peter’s oldest church.  And while a lot has been written about those early male ancestors over the years, we feel that these men would have been very proud to let a woman take her turn and to recognize Carol Johnson Menk for all of her accomplishments.”

She loved entertaining in her home, interior decorating, travel, reading voraciously, and getting together with friends.

She is survived by her brother Pell (Jiggs) Johnson and his wife Theresa of St. Peter, son Pell and his wife Stephanie Patterson-Menk of Santa Barbara CA, son Robert and his wife Luce Aubry of Portsmouth NH, daughter Margaret of Edina MN, one grandchild, Coco Menk of Toronto, Ontario, and many other relatives and friends. She was predeceased by her husband Martin, parents (Norma and Edward Johnson, stepfather George MacKenzie), and her sisters Gloria Davis, Myra Hermel, and Billee Peterson.

Visitation at St Peter Funeral Home, 906 N. Washington Ave, from 5:00 to 8:00 Tuesday, January 9th, and also one hour prior to the service at the church.  Funeral service at Trinity Lutheran Church, 511 5th St., St. Peter on Wednesday, January 10th at 2:00. Coffee to follow in the parish hall. Burial will be in the Spring.

The family requests that memorials go to the Gustavus Library Associates:  https://gustavus.edu/gla/celebrationcard.pdf

To order memorial trees or send flowers to the family in memory of Carol Edna Johnson Menk, please visit our flower store.