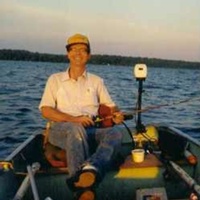 James “Jim” Curtis Thompson, age 71, of St. Peter, passed away Thursday, December 28, 2017 at Mercy Hospital in Coon Rapids, with his children by his side.

Memorial service will be held on Wednesday, January 3, 2018 at 11 am at St. Peter Funeral Home - Klein Chapel. Visitation will be one hour prior to the service. Interment will be at Lakeside Cemetery in Fairmont, MN at 2 pm.

Jim was born December 5, 1946 to LuVerne and Lucile Thompson in Fairmont, MN.   He moved to Granada 1952 and graduated from Granada High School in 1964.  He attended Lea College in Albert Lea and was a member of their first graduating class. He later attended and graduated from Mankato State University. Jim was united in marriage with Lyla Dahl on December 1, 1973 in Dassel, MN.  They made their home in Madison Lake and then in St. Peter.  They were blessed with two children.  Jim owned and operated Share Driving School in St. Peter.  In his spare time Jim enjoyed fishing, hunting with his dogs, and Studebaker cars. He had a lifetime subscription to the Studebaker magazine, Turning Wheels. He was also very proud to have completed the Twin Cities Marathon.  He was a member of Sunrise Assembly of God Church, and faithfully attended for many years.

To order memorial trees or send flowers to the family in memory of James Curtis Thompson, please visit our flower store.