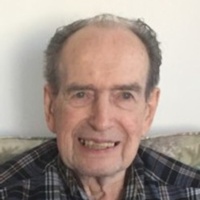 Peter was born on December 8, 1923 to William and Gladys (Coulter) Disher in Toronto, Canada. He moved shortly after with his family to Iron Mountain, MI. He graduated from Iron Mountain High School in 1942. Peter went to college in Marquette, MI and Ann Arbor, MI. While attending college, he met his wife, Phyllis. Peter and Phyllis (Floria) were married September 3, 1949. They moved to Illinois (Chicago and Galesburg) where Peter worked as a traveling salesman for a baby food company until he became a stockbroker for Francis I. Dupont. Their daughter, Catherine, was born in Galesburg. In 1961 they moved to Brookfield, WI where Peter continued in the investment field working with Francis I. Dupont, Robert W. Baird, and finally with the first Wisconsin Trust Co. in Milwaukee. After his retirement, Peter and Phyllis moved to St. Peter in 2006 to be closer to family. Peter enjoyed golfing, watching college and pro football, especially the Packers. He liked meeting new people and getting to know their story, and he was an avid history buff. Peter especially enjoyed spending time with family. He loved the UP of Michigan, especially Munising, Lake Superior, and Pasties.

To order memorial trees or send flowers to the family in memory of Peter Kerr Disher, please visit our flower store.