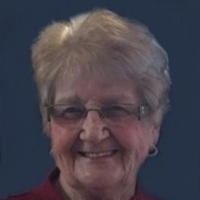 Vernette Ruth Krohn was born on August 27, 1936 to Otto and Hertha (Enter) Krohn in St. Peter, Minnesota. She attended school in St. Peter and graduated in 1955. During her school years she was an avid swimmer and competed in many meets and won many medals. She also saved the life of a child at the pool from drowning. Vernette and Ramon “Mickey” Biehn were united in marriage on September 22, 1956 at Marysburg Catholic Church. Out of this union, six children were raised on the family farm, which is a third generation homestead farm in Washington Township. After Ramon died she remained on the farm. She was a member of Marysburg Catholic Church. Vernette enjoyed playing cards with all of her special card playing friends, going to the casino, traveling to the Black Hills in South Dakota, and she especially enjoyed being with her family and friends.

Mom will always be especially remembered for her Christmases and all the homemade candies, cookies, and hors d’oeuvres she made. We will miss you greatly, hugs from all of us- your loving children.

To order memorial trees or send flowers to the family in memory of Vernette Ruth Biehn, please visit our flower store.