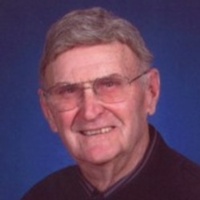 Funeral Service will be 11:00 a.m., Tuesday, September 26, 2017, at Our Savior’s Lutheran Church in Cleveland.  Visitation will be 4-7 p.m. on Monday at St. Peter Funeral Home, and continues one hour prior to the service at the church on Tuesday.

Russell was born August 22, 1931, at his home in Sharon Township, Le Sueur County.  He was the son of James and Tina (Kihn) Christensen.  Russell was a 1949 graduate of Cleveland High School.  He served in the U.S. Navy from January 1951-January 1955.  Russell was united in marriage to Stasia Biehn on July 11, 1953, at Marysburg Church in Madison Lake.  After they married, they moved to the home farm in 1955.

Russell was a member of Our Savior’s Lutheran Church in Cleveland, Jamestown Township Board, and the Madison Lake American Legion Post 269 since 1955.  He enjoyed spending time in Naples, FL over the winter months.

He was preceded in death by his parents; son, Michael; three brothers, Willard, Maynard, and George; and two sisters, Bernice and Ruth.

To order memorial trees or send flowers to the family in memory of Russell R. Christensen, please visit our flower store.