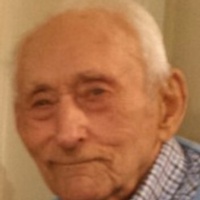 Walt was born September 1, 1921 to Paul and Anna (Binder) Vetter in Kasota, Minnesota. He attended John Ireland School and graduated from Kasota School and the Trades School for Welding in Shakopee. Walt married his high school sweetheart and the love of his life, Bernice A. Homer, on June 4, 1945. He enlisted and served in the U.S. Navy as a Navy Seabees as a Shipfitters 2 (1941-1945). He was very proud to have served in the U.S. Navy as an Iwo Jima veteran in World War II. Walter was the co-founder of Vetter Stone Company along with his father and three brothers in 1951. He was also the co-founder of Vetter Sales and Service with his wife, Bernice, and two sons, Jim and Jerry, in 1964. Walt was very proud of the City of Kasota and the people who lived there. He was the mayor and served the City of Kasota for over 50 years; he was known as “Mr. Kasota.” He was a long-time member of the Kasota Volunteer Fire Department, as well as the Church of St. Peter, Kasota Legion, VFW, and Knights of Columbus. When he was mayor he was involved in Region Nine Development, COG (City of Governments), Minnesota Valley Action Council, and League of Minnesota Cities. Walt loved the outdoors. In his younger years he was an avid hunter and fisherman. He especially liked to coon hunt and raise and train his bluetick coon hounds. Walt loved his family and was very proud of them and their accomplishments.

Thank you to the staff of Ecumen Prairie Hill and to the Mayo Hospice Team East for their kindness, guidance, and excellent care for our father.

To order memorial trees or send flowers to the family in memory of Walter Bernard Vetter, please visit our flower store.