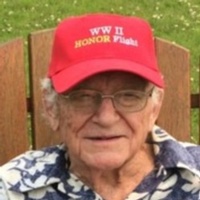 Memorial service is 11:00 am on Thursday, July 13 at Trinity Lutheran Church in St. Peter with visitation one hour prior.  Burial will be at Ft. Snelling National Cemetery with Honors.  St. Peter Funeral Home is assisting the family.

Don was born on January 20, 1925 in Minneapolis to Albert and Laura Slarks.  He graduated from Minneapolis Roosevelt High School and then enlisted in the US Navy serving as a Seabee in the Asian-Pacific Theater during World War II.  He returned home and graduated from Augsburg College in Minneapolis.  Don was united in marriage to Marlys Barsness on June 13, 1950.  He worked as a high school teacher and athletic coach before continuing his education at Ball State in Muncie, IN where he was a graduate assistant teaching physical education courses.  He also did further graduate work toward his doctorate at Indiana University in Bloomington, IN.  Don and Marlys moved to St. Peter in 1954 where he was an assistant professor of Psychology, head wrestling coach, their first sports information director and administrator at Gustavus Adolphus College until retiring in 1992.  He enjoyed sports especially Gopher football, golf, playing poker with his GAC group and writing sports stories for the St. Peter Herald.

To order memorial trees or send flowers to the family in memory of James Donald Slarks, please visit our flower store.