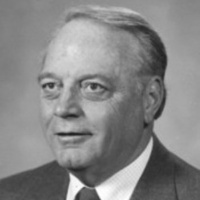 Jerry was born on February 8, 1928 in New Albin, IA to Fred and Maida (Gantenbien) Lager.  He graduated from high school in Rockwell City, IA and received his bachelor’s degree from the University of Iowa.  Jerry served in the United States Army from 1950-1952.  In May 1956, Jerry was united in marriage to Gloria Hains.  Jerry was the co-founder of Lager’s Chrysler Plymouth Dealership in St. Peter in 1965 along with his brother William F. Lager.  In 1977, Jerry founded Lager’s of Mankato, which is currently Lager’s Chrysler World.  Jerry was dedicated to the St. Peter community and lead a variety of fundraisers to promote local businesses and his community.  He was a founding member of the St. Peter Ambassadors and the St. Peter Development Corporation along with being an active member of the St. Peter Chamber of Commerce.  Jerry was a member of the Church of St. Peter, Knights of Columbus, and participated in Rotary.  Jerry served many years on the Chrysler Dealer Advertising Board, including President and served on the National Dealer Council for Chrysler Corporation.

Jerry retired in 1992 and spent his summer months at his cabin on Namakan Lake in Ontario, Canada.  He enjoyed watching old westerns, traveling, playing cards, fishing, and most importantly, spending time with his children and grandchildren.  Jerry had a sweet nature about him, always so kind and generous.  He always wanted what was best for his family and the community that surrounded him.  Throughout his life, he touched many lives.  Jerry will be forever remembered for his great sense of humor, charming personality and his community involvement.

Jerry is survived by two sons, Ric Lager of Golden Valley and his children, John Lager and Christine Lager, and Kip (Mary) Lager of St. Peter and their children, Alissa, Ashley, and Amy Lager; brother, Larry (Rita) Lager of Las Vegas, NV; and many nieces and nephews.  He was preceded in death by his parents; wife, Gloria in 2005; brother, William in 1989; and sister, Rosemary in 2006.

To order memorial trees or send flowers to the family in memory of Gerald J. Lager, please visit our flower store.