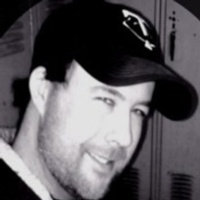 “Sometimes you want to go where everybody knows your name, and they’re always glad you came.” Like Norm from the “Cheers” TV series, Robbie was known and beloved by many people.

He graduated from St. Peter High School in 1996. During his freshman year, he participated in the state wrestling tournament.

Rob lived a short but full life. From wrestling and playing hockey as a youngin’, to racing dirt bikes with fearless jumps in his teens and 20s, he devoured all that life had to offer.

He had a passion for dancing to his own tune, dirt biking, skateboarding, hockey, wrestling, bonfires, going to music concerts, and the television show “Seinfeld.”

Rob had an infectious smile. He lived for his family, his dog Bailey, his friends, and his special-needs clients. He had recently learned sign language to share his gift of gab with a wider audience at work.

He touched many lives and was a friend to all. His favorite quote, “Living the Dream,” will take on a greater purpose as he joins friends and family on his next adventure.

During his last couple of weeks, Rob often reminded his family to stay strong as he had a lot of people to reunite with. He said he lived a great life.

Visitation will be from 4:00-5:30 p.m. on Friday, April 28 at St. Peter Funeral Home with a prayer service  and sharing of memories at 5:30 p.m. A Celebration of Life will be held at his parents’ home at a later date.

To order memorial trees or send flowers to the family in memory of Robert Lynn, please visit our flower store.