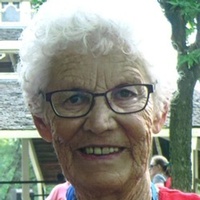 Mass of Christian Burial will be held 11 a.m., Friday, March 10, 2017 at the Church of St. Peter in St. Peter with visitation one hour prior to the service. Burial at Calvary Cemetery will follow.

Kitty was born October 15, 1934 in St. Clair to Clifford and Anna (Schultz) Hager. She graduated from St. Peter High School. Kitty married Duane Bonderson on December 8, 1951 and together they raised two daughters, Nancy and Diane, until his passing on April 4, 1966. She later married James “Jim” Littig on June 30, 1979. Jim died on March 13, 2010. Kitty retired from the St. Peter Regional Treatment Center in 1987. She was spunky, ambitious and a great conversationalist…loved her popcorn, puzzles, long walks,

and her “hometown” of St. Peter. Kitty was also an active member of the Church of St. Peter and she was a Catholic Daughter.

The family would like to thank the staff of Benedictine for the loving and excellent care they provided for our mom.

To order memorial trees or send flowers to the family in memory of Kathleen "Kitty" Littig, please visit our flower store.