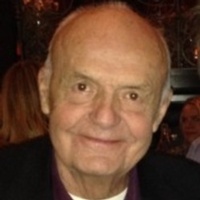 Paul R. Elofson, age 87 of St. Peter and formerly of Edina, passed away at home on Tuesday, November 29, 2016. Guided by his creator, he passed away peacefully with family and friends at his side to again be with the love of his life, his wife Donna.

Paul was born August 30, 1929 in Cambridge MN to Russell G. and Rose N. (Lideen) Elofson. He grew up in Cambridge, graduating from high school in 1948. He spoke of many wonderful memories of a childhood filled with stories of loyal friends from High School and many great hunting and fishing outings.  He then attended Gustavus Adolphus College in St. Peter, graduating with a Bachelor’s Degree. He figured he could get through college and obtain good grades in Theater classes to offset the mediocre grades he got in Business. It worked. After college, he was drafted into the US Army; He served 2 years and was honorably discharged in 1954. He was in the right place at the right time: The FBI was hiring. Paul applied and received a telegram that he got the job. He worked for 31 years as a Special Agent and was stationed in New York City, Chicago, and finally Minneapolis. After retiring, he continued as a contract investigator for the Air Force, State Department, and FBI. He loved meeting new people and faces all over the Midwest. Paul met Donna Zila and knew she was the one. Donna felt the same. They were united in marriage on August 19, 1960 in Minneapolis. They enjoyed many fantastic years together raising their children and vacationing with family at the cabin. They enjoyed wonderful times on Wilkins Lake in Northern MN with friends and neighbors.  Paul was active in the Lion’s Club, his church choir, the Y’s Men, Community Theater, and the Society of Former FBI Agents. He enjoyed charity work, fishing, hunting, trips to Moose Lake, acting, his pets, and most importantly, his family.  He claimed that he was the luckiest guy on the Planet.

Paul never took himself too seriously. He had a joyful and playful attitude. He was a lovable jokester and always the comedian. He brightened everyone’s day with his humor, adorable smile, and his ability to make people who met him feel accepted and valued.

Left to cherish his memory are his sons: Bruce (Olga Antonova), Andrew (Jessica); Daughter: Mara (Edward) Schmidt; grandchildren: Emilee, Mitchell, Drew and Liliana; sister: Connie Foseid; and many nieces, nephews and friends. He was preceded in death by his wife, Donna in 2008.

A memorial service will be at Normandale Lutheran Church in Edina on January 13, 2017 at 12:00 pm, with a private burial at Fort Snelling National Cemetery, Minneapolis. Visitation will be one hour prior to the service. It is requested that memorials be made in lieu of flowers to a charity or organization of your choice.   The family would like to thank the staff at Ecumen Prairie Hill for their compassion and care for Paul while he was a resident.  St. Peter Funeral Home is assisting the family.

To order memorial trees or send flowers to the family in memory of Paul Elofson, please visit our flower store.