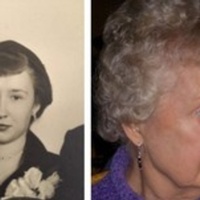 Marie Dawald, 87, of Burnsville, MN, formerly of Cleveland, MN, Bonita Springs, FL, Bloomington, MN, and St. Peter, MN, passed away September 14, 2016.  She was born February 15, 1929 in St. Peter, MN to Joseph and Josephine (Sauer) Daun.  She grew up on the Daun family farm located at the current Traverse des Sioux site.  She attended school in St. Peter and graduated from St. Catherine’s College in St. Paul.  She was united in marriage to Donald Dawald of Waseca, MN on November 3, 1951.  Together they raised 8 children in Bloomington, MN.

Marie was a woman of incredible wit, sweetness, faith and love.  She loved babies, baking, crafts, birds, games, flowers and spending time with friends and family at their lake home.  She was famous for her sugar cookies and apple pie, her one-liners, her uncanny way of always winning board games.  She visited and took care of the elderly and the lonely.  She prayed for those she loved and those she didn’t even know.  Her grandchildren and great-grandchildren were her greatest joy.  Every one of them was special to her and she took great pride in each of them.  It’s impossible to explain how wonderful of a woman she was, or how much her family and friends will miss her.

She was preceded in death by her husband Don, daughter Julie, parents Joe and Josie, sisters Dorothy (Del) Clobes, Sally (Ken) Benson, and in-laws Roman (Leota) Dawald.  Visitation will be held Thursday, September 22nd from 4:30 – 7:30 p.m. (with remembrances at 7 p.m.) at St. Peter Funeral Home - Klein Chapel, 906 N. Washington Avenue, St. Peter, MN.  On Friday, September 23rd, there will be visitation at 10 a.m. with the Funeral Mass beginning at 11 a.m., followed immediately by the burial and a light luncheon at the Church of St. Peter, 1801 W. Broadway, St. Peter, MN.  A celebration of Marie’s life will be held at “the Cabin” on Lake Jefferson, Cape Horn, Cleveland MN.  All are welcome. Memorials may be given to a charity of the donor’s choice.

To order memorial trees or send flowers to the family in memory of MARIE JOSEPHINE (DAUN) DAWALD, please visit our flower store.