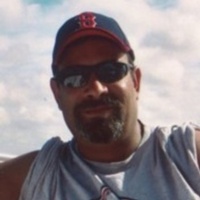 Michael James Levine, 54, of St. Peter, MN, died May 22, 2016 at University of Minnesota hospital in Minneapolis due to complications from an illness.

Mike was born May 1st, 1962 in Worcester, MA, the son of Ronald and Joanne Levine.  He lived until the age of thirteen in Leominster, MA, then moved to Miami, Florida until the age of 18, then  on to his beloved Rocky Mountains in Colorado, where he met his future wife, Gail Lambert of St. Peter, MN, in Basalt, CO.  They were married in March of 1989, and were blessed with three wonderful sons.  After their divorce in 1999, Mike stayed on in St. Peter to be near his sons, and was a kitchen manager at Whiskey River for many years.

Mike was a wonderful and loving son, a fantastic cook, loved to play softball, and was on a team late into life and was a coach and team captain for many years.  He also loved to golf, which he did every chance he could.  He was darn good at about any game he played, be it pool, ping-pong, shuffleboard, etc.  He loved his sport teams, especially the Vikings, Broncos and MN Twins and kept an interest in the New England Patriots.  He loved swimming in the ocean, the mountains of Colorado, and enjoyed  his Classic Rock music.  His sons were the most important thing in his life, and he was a great father, always there for them and at all events in their lives.  He also took them to see their grandparents in Florida whenever possible throughout the years, and they all enjoyed a lovely Western Caribbean cruise a few years back.

Mike is survived by his sons, Zach, Matt and Jake Levine, his mother, Joanne Willard, and a sister, Robin McDonald.  He was preceded in death by his father, Ron Levine, and beloved step-father, Bob Willard.

A memorial service will be held at St. Peter  Funeral Home on Tuesday, May 31st at 11:00am, with a visitation starting at 10:00am.

To order memorial trees or send flowers to the family in memory of Michael Levine, please visit our flower store.