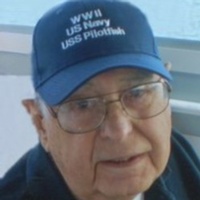 Memorial service is 2:00 pm Thursday, March 31, 2016 at Trinity Lutheran Church, St. Peter. Fr. Thomas Harries will officiate. Visitation will be 4:00 – 7:00 Wednesday at St. Peter Funeral Home and also one hour prior to the service at the church.

Martin was born May 21, 1923 to Martin, Sr. and Amelia Menk, in St. Peter. He graduated from St. Peter High School in 1941. He started college in the engineering program at Gustavus Adolphus, but got impatient with “V-Programs” meant to pre-train young men for the military, and enlisted in the Navy.

He served for three years in the submarine service in the South Pacific, earning four battle stars on war patrols aboard the USS Pilotfish and the USS Argonaut. The captain of the Argonaut promised him admission to the Naval Academy after the war, but Martin, though honored, decided against a military career. In an interview about his service many years after the war, Martin said: “We experienced things that 18 year olds should not have to experience. We became grown men overnight and came back to work or go to college, married and had families and became responsible citizens in our communities, but we never forgot the experience of the war… But war, in my opinion, is usually just plain hell.”

In 1946 he returned to Gustavus Adolphus College in St. Peter where he studied and also taught engineering with his mentor, John Bolton. He transferred to Arizona State University but ended up taking a friend to Pullman, Washington in his beat-up Pontiac with an engine that would come loose from its mounts if you turned too sharply. They made it and he stayed on and graduated in 1949 with a B.Sc. in Civil Engineering from Washington State University.

He returned to St. Peter and in 1949 founded Bolton & Menk, Civil Engineers & Land Surveyors, with his friend and former professor, John Bolton. Their first office was in Martin’s sister’s basement, until they built a small building they planned to sell as a garage in case things didn’t work out. Martin lived at home to save money while they struggled to get their feet under them. Their first major “expansion” was having their wives help out in the office and hiring some college students to help in the summer. In 1965, John retired and Martin became company president. According to one of his long-time employees, in those early days he was a master at calming customers in the field and coming up with just the right answer to a problem under the guise of thoughtfully lighting a cigarette and taking a moment to consider the situation. When he retired in 1992, the company had five offices in two states and 85 employees. Today the firm has over 400 employees serving some 225 communities in three states from 15 offices.

On April 5, 1951 he married Carol Johnson, daughter of Norma and Edward Johnson and stepdaughter of George MacKenzie and they raised a family of three.

Locally, he was active in the VFW, the American Legion, US Submarine Veterans of WWII, Rotary, Lions, Gustavus Adolphus Alumni Association, Chamber of Commerce, and both Nicollet County and St. Peter Planning Commissions. He was a long time member of the Church of the Holy Communion in St. Peter. He is a member of the St. Peter High School Hall of Fame.

At home, he was a loving husband, great Dad, a very unassuming and kind man with a gentle sense of humor.  He welcomed his daughters-in-law and grandchild warmly into the life of the family. He thoroughly enjoyed the company of all of his extended families – both his own relatives and those on Carol’s side of the family.

Among many other things, he enjoyed sailing on Lake Washington, travel with his wife and family, Twins baseball and Vikings football. For many years after his retirement, he and his closest friends would get together for Monday night cards and weekly coffee groups. In 2013 he attended the commissioning of the submarine USS Minnesota at Norfolk VA where he received a standing ovation as the only WWII submarine veteran in attendance.

Martin is survived by his wife of 65 years, Carol, three children, Pell (Stephanie Patterson-Menk) Menk of Santa Barbara, CA, Robert (Luce Aubry) Menk of Portsmouth, NH, and Margaret Menk of Edina, MN, one grandchild, Coco Menk of Chicago, IL, and many other relatives and friends. He was predeceased by his parents (Martin Sr. and Amelia), and his brothers and sisters (Jack, Ernie, Gretchen (Pfanku), & Lorraine (Merkley)).

To order memorial trees or send flowers to the family in memory of Martin Clarence Menk, Jr., please visit our flower store.