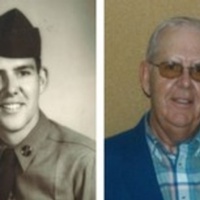 Wallace Francis Reineke, 87, of St. Peter, passed away peacefully March 1, 2016 in his home, surrounded by family.

Memorial service will be 11:00 am Monday, March 7, 2016 at St. Peter Evangelical Lutheran Church in St. Peter. Visitation is 9 to 11 at the church. St. Peter Funeral Home is assisting the family with arrangements.

“Wally” was born on April 4, 1928 to Francis and Anna Reineke in Jackson County, MN. First and foremost, Wally was a lifelong Cubs fan. He graduated from Lakefield High School in 1946. He entered the service in 1951 and was deployed in 1952 after meeting the love of his life, Lois Anderson. They were married while Wally was serving in Korea on August 14, 1952. They were blessed with 5 wonderful children. He was a member of St. Peter Evangelical Lutheran Church for over 50 years, Lion's Club member for over 45 years, Chamber of Commerce, St. Peter Ambassador’s Club, Shoreland Country Club, and a lifetime member of the American Legion.

Wally was preceded in death by his wife Lois, his parents Anna and Francis, sisters Faye and Berniece, and children Jeff, Janette LeRoss, Joel, and Jill Hollnagel.

To order memorial trees or send flowers to the family in memory of Wallace "Wally" Reineke, please visit our flower store.