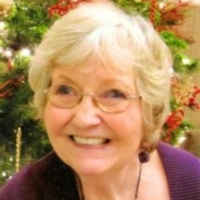 Memorial service 11:30 am Monday, January 25, 2016 at First Lutheran Church, St. Peter. Visitation one hour prior to the service. Memorials may be given to the Pacer Center, Champions for Children with Disabilities: www.pacer.org. St. Peter Funeral Home is assisting the family with arrangements.

Jeanie was born on June 24, 1938 born at home near McDonald's Mill, Virginia to Paul Sr. and Oberia (Ratliff) Wright and was raised on a small farm in the hills of southwest Virginia. She is a graduate of Blacksburg High School and attended Gustavus Adolphus College in St. Peter, proudly graduating Magna Cum Laude, with a major in Religion. She married Donald McNeil Sr., who is now deceased, and together they had two children: Donald Jr. and Deborah. She later was married to David Reese of St. Peter. Jeanie was employed for many years at Gustavus as an administrative assistant in the Chaplain's office and also volunteered at First Lutheran Church in the office. She also spent time volunteering at the St. Peter Schools as an English and Reading mentor. Jeanie was a voracious reader and loved spending time with friends and family. She took pride for being a daughter of Virginia, and to know her was to know the Blue Ridge Mountains.

To order memorial trees or send flowers to the family in memory of Jeanie Wright Reese, please visit our flower store.