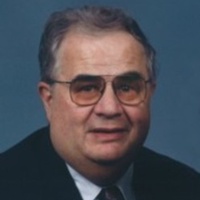 James Bollum, age 83 of St. Peter passed away on Sunday, January 17, 2016 at the Benedictine Living Community in St. Peter.

Mass of Christian burial will be at 11:00 am on Friday, January 22, 2016 at the Church of St. Peter in St. Peter. Visitation will be from 9:30 until the start of the service at the church. Memorials preferred to the St. Peter High School Football Booster Club. St. Peter Funeral Home is assisting the family with arrangements.

James was born on November 12, 1932 in Waseca to Edward and Vivian (Sheehan) Bollum. He graduated from Sacred Heart School in Waseca and then attended Mankato State Teachers College. After graduating, he enlisted in the US Army, serving until 1957. On October 25, 1958 he was united in marriage to Joan Eustice. James was a Social Studies teacher in several schools before settling in St. Peter in1969. He retired from St. Peter Schools as Guidance Counselor in 1993. He was a member of the Knights of Columbus and the American Legion Post 37. James enjoyed watching high school sports, reading, movies, and taking Joan to Bingo before her passing in 2008.

He was preceded in death by his wife: Joan; parents; and a brother, Lyle.

To order memorial trees or send flowers to the family in memory of James Bollum, please visit our flower store.