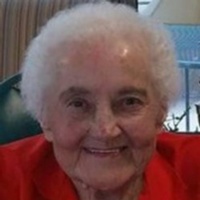 Funeral Service will be held at 2:00 p.m., Saturday, December 12, 2015 at First Lutheran Church, St. Peter. Visitation will be two hours before service on Saturday at the church. Interment will be in Greenhill Cemetery, St. Peter. St. Peter Funeral Home is handling arrangements.

Florence was born August 16, 1929 to Emil and Theresia (Neidecker) Wies in Rush River, Sibley County, Minnesota. The youngest of nine daughters she grew up in a small farm house on the family farm. She was baptized at St. Mary’s Catholic Church in New Ulm and confirmed at St. Joseph’s Catholic Church in Henderson. Florence attended country school at Rush River and Sand Prairie and high school at LeSueur and Henderson. She was united in marriage to Clarence Oscar Samuelson on October 12, 1946 at First Lutheran Church in St. Peter. She was a homemaker for her family for many years and then became employed with the St. Peter Schools in food service where she worked for 27 years until retiring. Florence enjoyed walking, riding bike, writing letters to family and friends, baking holiday cookies, making quilts, and going for coffee at the Dairy Queen and McDonalds. Her family was her pride and she cherished her time with her grandchildren, great-grandchildren, and great-great-grandchildren.