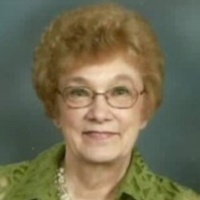 Elaine Bonnema, 78 of Jordan and formerly of St. Peter, died November 27, 2015 in Minneapolis beneath the glow of the nighttime city skyline.

Elaine was born, the youngest of 12 children to H. Arthur and Emma Marie (Olson) Thompson, on June 16, 1937 in Willmar, MN. As the youngest of 12 she was always known as “Little Elaine”.   She graduated from high school in June of 1955 and married her sweetheart, Harland Evenson, that same month. They shared 19 years together and had six daughters. After his death, Elaine was remarried in 1975 to Clinton Bonnema and began her life in St. Peter.   Elaine’s passion in life was as wife, mother and grandmother, but her work life was in retail, spending the past 24 years at Herberger’s in Mankato, MN, retiring just this year.   She loved to garden, can vegetables, bake and make lefse – all of which she had achieved “master” status.

Elaine was greeted in heaven by her parents, her husband Harland (1974), husband Clinton (1998), daughter Mary (2006), eight brothers and two sisters.

She was loved and cherished by her entire family and considered a beautiful blessing to each one of them. She will be dearly missed!

Memorial service is 11:00 am Thursday, December 3, 2015 at St. Peter Evangelical Lutheran Church, St. Peter with visitation at 9:00 am. St. Peter Funeral Home is assisting with arrangements.

To order memorial trees or send flowers to the family in memory of Elaine Bonnema, please visit our flower store.