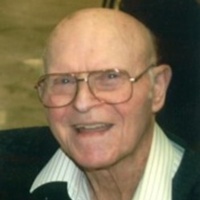 Floyd Boucher, age 97, of St. Peter, died on Friday, October 16, 2015 at the Benedictine Living Community in St. Peter. Memorial service will be held on Friday, October 23 at 11:00 a.m. at Trinity Lutheran Church in St. Peter. Visitation will be held one hour prior to the service at the church. Burial will be at Woodlawn Cemetery in St. Peter. In lieu of flowers, memorials are preferred. Floyd was born near Nicollet, MN to William and Mary "Minnie" (Sisson) Boucher on December 2, 1917. He attended St. Peter High School. He worked with his dad from 1935-1941 in their chicken hatchery and drove school bus. Floyd served in the United States Army from 1941-1945. He married Audrey Johnson on July 25, 1945. They moved to Florida until he got out of the army in December 1945. In 1946, Floyd bought his first school bus starting Boucher Bus Service. He and Audrey worked together running the school buses and Green Valley Mobile Home Park until 1977 when they retired. After they retired, they worked together making and selling country woodcrafts. Floyd and Audrey were married for 68 years. Left to cherish his memory are his daughter, Susan (Stephen) Myhra; grandsons, Neal, Nathan (Amy), and Matthew; great-grandchildren, Andrew and Megan Myhra; sisters-in-law, Elaine (Kenneth) DeZeeuw and Louise Johnson; and nieces and nephews. He was preceded in death by his parents; wife, Audrey; brother, Charles (Marion); sisters, Pearl (Earl) Hughes, Leona (Arthur) Chouanard, and Hazel Boucher; step-mother, Anna; mother and father-in-law, Conrad (Elmira) Johnson; brother-in-law, Harris Johnson; and sister-in-law, Shirley (Glenn) Jacobsen.
To order memorial trees or send flowers to the family in memory of Floyd Daniel Boucher, please visit our flower store.