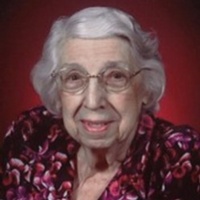 Muriel Sophie Ida (Krohn) Stoffregen (93) passed away on Tuesday, March 3rd at Benedictine Living Community with her loving children at her side. Her children and grandchildren surrounded her with love and support in her final days. Muriel was born in rural Nicollet on September 07, 1921 to Otto and Hertha "Hattie" Krohn. She was baptized into the Lutheran faith, confirmed and attended St. Peter Public Schools. After 5 years of friendship and courting Muriel married William Stoffregen at St. Peter Evangelical Lutheran Church on June 07, 1945 and they enjoyed almost 65 years of marriage together. Muriel was a homemaker and in 1968 began working at the Holiday House. Muriel was an Oshawa 4-H leader for 12 years, also a member of the Berea Circle, Home Extension Group and Oshawa Garden Club. She enjoyed cooking, gardening, floral arranging, crafts, sewing and was skilled at Sudoku and Cryptoquote puzzles. Muriel is survived by three sons and two daughters, Michael and Theoline of Windom, Allen of Lewiston, Idaho, Gerald and Sharon of North Mankato, Jan and David Johnson of St. Peter and Jill Stoffregen of Cass Lake. Grandchildren Tonia (Garrett) Weber, Brandon (Katie) Stoffregen, Michelle (Jon) Hermanson, Amanda and Stacy Stoffregen, Emily (Ryan) Ponwith and Jameson Johnson, Robert and Sophie Draper. Great-Grandchildren Cole and Dylan Weber and Ana and Greta Stoffregen. She is also survived by three sisters, one brother-in-law and several nieces and nephews. She was preceded in death by her beloved husband William on February 22, 2010 and 2 brothers and 1 sister. Funeral service will be held at 11:00 am on Saturday, March 7, 2015 at St. Peter Evangelical Lutheran Church in St. Peter with visitation at 10:00 am. Burial will be at Greenhill Cemetery, St. Peter. St. Peter Funeral Home is assisting the family with arrangements.
To order memorial trees or send flowers to the family in memory of Muriel Sophie Ida Stoffregen, please visit our flower store.