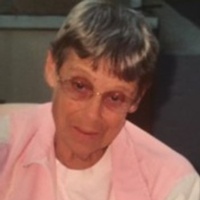 Mabel V. Pagel, 79, of Havre, MT, passed away on Tuesday, February 17, 2015, at her residence of natural causes. Funeral service will be held at 2:00 pm on Tuesday, February 24, 2014 at St. Peter Funeral Home with visitation one hour prior. Burial will be at Woodlawn Cemetery, St. Peter. Mabel was born on July 17, 1935, in Hinsdale, MT, to Harry and Elsie (Kenney) Rennick. She was raised in Hinsdale and Glasgow, graduating from Glasgow High School in 1952. Mabel married Bert Keough in 1952 in Glasgow, and their union was blessed with a daughter. The couple later divorced. Mabel worked for Valley Cleaners in Glasgow for 3 years, before attending Northern Montana College, where she received her certificate in cosmetology. In 1974, Mabel married Herb Pagel in Cleveland, Minnesota, and the couple remained in Minnesota for a time, where she worked as a cook for the St. Peter School District 508 for several years. The couple moved between Minnesota and Havre, MT, several times, before relocating to Havre for the final time in 2011. Mabel was a social, fun-loving woman who enjoyed fishing, playing cards, and traveling. She was patient with her loved ones, and enjoyed teasing them, but was a very strong woman who stuck with what she felt was right. Mabel was preceded in death by her parents, Elsie Taylor and Harry Rennick; her brothers Burel, Jerry, Robert, Raymond, Teddy, Florence, and Harry Rennick, Jr.
To order memorial trees or send flowers to the family in memory of Mabel V. Pagel, please visit our flower store.