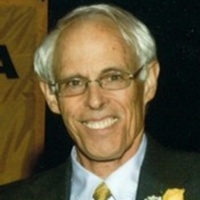 Stephen L. Wilkinson, age 73, retired professor and tennis coach at Gustavus Adolphus College, died peacefully in his home in St. Peter, Minnesota, on January 21, 2015. His life was filled with purpose and his last days with calls from family and friends. His wife Barbara was at his side, as she had been throughout their marriage of 48 years. Steve's life was ended by kidney cancer, with which he had lived courageously for nearly seven years. Steve was a native of Sioux City, Iowa, son of Byron and Delpha Wilkinson. He graduated from Central High School in 1959. He graduated from the University of Iowa with a BS in Accounting, a Masters in Economics, and a Ph.D. in World Religions. After meeting his future wife on a mountain top in Washington State, he married Barbara Renk in Hamburg, Germany in 1966. He is survived by his wife, two daughters, Stephanie and Deborah, and their husbands, Scott Reddington and Jon Sundal, four grandchildren, Caroline, Eloise, Stephen, and Audrey, and siblings Ann, John, and Mike Wilkinson, and sister-in-law Diane. In 1970, Steve began his career at Gustavus, teaching World Religions and Ethics, taking students to Hawaii and on international experiences to Australia, New Zealand, India and Japan. For 39 years, "Coach" mentored and successfully coached players of the Gustavus men's tennis team to national, All-American and All-Conference honors. He had a no-cut policy which permitted large numbers of committed students to excel in the game they loved. Wilkinson was a visionary and played a key role in the fundraising and construction of the Gustavus tennis facilities, which are considered to be among the finest in the nation. In 1977, Steve and his wife Barbara founded Tennis and Life Camps, which they directed for more than 35 years. They taught thousands of players not only serves, volleys and groundstrokes, but also a way to live. A cornerstone of this teaching is the "Serenity Prayer," which asks for wisdom in making life's choices. In addition, the "Three Crowns", positive attitude, full effort, and sportsmanship, give people the structure to carry out these choices. Steve tried to learn every camper's name as he put "smiley faces" on their rackets. Steve was an accomplished tennis player and dedicated his life to the sport he loved, as a member of numerous national tennis organizations and as inductee in several Halls of Fame. Among other awards, he was honored to receive the International Tennis Hall of Fame Educational Merit Award and the Lifetime Achievement Award from the University of Iowa. As a player, he gathered honors on the Senior Tennis Circuit in the age divisions of 45, 50, 55, and 60-and-over age divisions where he was ranked No. 1 several times. Internationally, he represented the United States in the Dubler Cup, Perry Cup, and Austria Cup. Besides tennis, Steve loved to read and discuss current events and philosophical questions. He loved to hike and bike and to spend time with his family at home and at the family cottage in Wisconsin. Favorites were trips to Europe and Hawaii. He planned family vacations to exciting places like Puerto Rico and Mexico and never missed a family reunion with parents and siblings. With his grandchildren, he never tired of teaching them the basics of tennis, keeping it fun for hours, whether on tennis courts or on drive ways. In his memoir, Steve captured his philosophy of life, "Let Love Serve". Steve will be missed by his family and a large community of friends. He will be honored at his memorial service at 11 a.m. on Saturday, January 31, at Christ Chapel on the Gustavus Adolphus campus, with Pastor Alan Bray of First Lutheran Church of St. Peter officiating. A luncheon will follow the service in the Evelyn Young Dining Room in the Charles Jackson Student Center. Visitation will take place on Friday, January 30, from 4-7 p.m. at First Lutheran Church in St. Peter. In lieu of flowers, memorials may be made to First Lutheran Church, the "Tennis and Life Camps Endowed Scholarship Fund," and the Gustavus Men's Tennis Team.
To order memorial trees or send flowers to the family in memory of Steve Wilkinson, please visit our flower store.