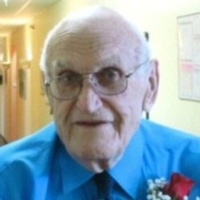 Gordon E. Struck, age 91 of St. Peter and formerly of Cleveland, passed away on Saturday, January 10, 2015 at the Benedictine Living Community in St. Peter. Funeral service will be held at 11:00 am on Wednesday, January 14, 2015 at St. Peter Evangelical Lutheran Church with Rev. Matthew Rauh officiating. Burial will be at Cleveland Lutheran Cemetery. Visitation will be held from 5:00 - 7:00 pm on Tuesday at the church and will continue one hour prior to the service Wednesday. Memorials are preferred to the church in lieu of flowers. St. Peter Funeral Home - Klein Chapel is assisting the family with arrangements. Gordon E. was born on March 24, 1923 at the Covell Hospital in St. Peter to Albert R. and Elsie H. (Hopp) Struck. He grew up on the Struck family farm and attended Cleveland Public School. On April 5, 1946 he was united in marriage to Lorraine M. Haack and they made their home on his family farm in rural Cleveland. In 1975, after retiring from farming, they moved to Lake Jefferson and in 2006 they moved to a townhome in Cleveland. They later moved to St. Peter. Gordon farmed for 35 years and later worked at the Farmers Seed and Nursery in Le Center, the Le Sueur County Highway Department mowing in summer and was a janitor at the Cleveland Public Schools. He was a member of St. Peter Evangelical Lutheran his whole life and spent 60 years as an usher. He was also on the Cleveland Township Board for 38 years, and volunteered as a 4-H leader for 20 years. Left to cherish his memory are his children: Duane (Bernadine), James (Denise), Gerald (Terri), Deborah (Robert) Gehrke, and Suzanne; grandchildren: Kelly, Tonia Knapp, John, Christy Leopold, Jill, Brian, Kyle, Kim Gehrke, and Katie Gehrke; great-grandchildren: Kaylee, Gavin, Olivia, MaKenzie Mealey, and Sabrina and Isabella Knapp and Audree Lorraine; and many nieces and nephews. He was preceded in death by his parents, wife Lorraine, two grandsons: Andy and Mike Struck and sister: Mildred Skelly and brothers: Eldon and Marvin.
To order memorial trees or send flowers to the family in memory of Gordon E. Struck, please visit our flower store.