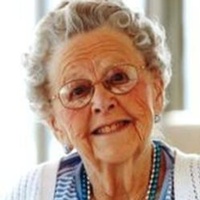 Funeral service will be held at 11:00 am on Monday, May 20, 2013 at First Lutheran Church in St. Peter with Rev. Don Holmstrom officiating. Visitation will be one hour prior to the service at the church. Burial will be at Resurrection Cemetery, St. Peter. St. Peter Funeral Home " Klein Chapel is assisting the family with arrangements.

Edna was born on February 16, 1921 in St. Peter to Albin and Hulda Anderson. She was a life long member of First Lutheran Church, being baptized and confirmed there. On September 9, 1944, she was united in marriage to Willard Pehrson at First Lutheran and they made their home in rural St. Peter. She was a homemaker and also worked at Gustavus Adolphus College in the housekeeping department. After moving to the Benedictine Living community, she was very active in the group activities, the bell choir, the Red Hats and as a volunteer. She was always very social and enjoyed being around others.

She was preceded in death by husband Willard in 2001 and a sister.

To order memorial trees or send flowers to the family in memory of Edna L Pehrson, please visit our flower store.