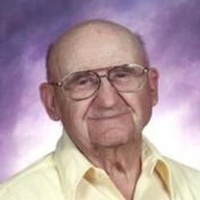 Milo was born November 1, 1923 to Paul and Elnora Mueller Ravely Roecker in Edgley, ND. Milo's mother died before he was a year old and he was raised by aunts and uncles in North Dakota and Southern Minnesota. He worked for the Waseca Tractor and Implement Dealership, as a farm hand in Iowa for the Stonekings and for his brother-in-law Gerald Connor. In 1961, he went to work for the Feed Mill in St. Peter, then for the Poultry Processing Plant in St. Peter and retired from Gustavus Adolphus College where he was employed for 22 years in ground maintenance and plumbing departments. Milo married Dolores T Connor n September 12, 1951 at the Immaculate Conception Church of Marysburg. They lived in Janesville, then on the Connor Family farm, before moving to the farm site where Milo lived until 2010 when he moved to Pheasant Ridge Assisted Living.

Milo is survived by one sister-in-law Delphine Roeker of Alma City, one brother-in0-law Ben Marilyn) Decker of rural Kasota, and many nieces and nephews.

He was preceded in death by his wife Dolores, brothers: Clifford, Ted, Leonard and George; sister Silva Coleman, and half sister Nielle Ravely.

Mass of Christian Burial will be held at Immaculate Conception Catholic Church of Marysburg on July 27th, 2013 at 10:00 am. Burial will be in the Marysburg Cemetery with lunch to follow.
To order memorial trees or send flowers to the family in memory of Steven Rozsa, please visit our flower store.