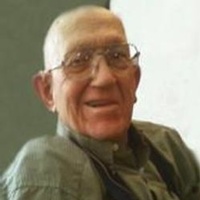 Memorial Mass will be held at 11:00 a.m., Thursday, July 25, 2013 at the Church of St. Peter Catholic Church with Fr. Todd Petersen officiating. Visitation with the family will begin one hour prior to the service at the church. Burial will be in Calvary Cemetery in St. Peter. St. Peter Funeral Home assisted the family with arrangements.

George was born March 5, 1918 to Seymour Joseph and Verna Rae (Shaner) Klocow in Lexington Township, Le Sueur County. He attended school in St. Peter through the 8th grade, at which time the male members of farm families attended school part-time and were taught agriculture lessons. They then assisted on the family farm during planting and harvest seasons. He was also a member of the National Guard until losing his left arm in a farm accident. In 1940, George married Mary Weber in Cleveland, MN. They were blessed with five children: Joseph, Edward, Elizabeth, Meredith, and William. George farmed in Sibley County near Rush River until 1957 when he moved his family to St. Peter. He was then employed at the St. Peter Regional Treatment Center while the State maintained a self-sustaining farm, growing crops, raising cows and pigs. When the farm closed, George was transferred to the maintenance Department where he worked until retirement. Due to George's commendable work ethic and understanding of his peers, he was elected President of the local AFSCME Union for several terms, seeing the employees at the Regional Treatment Center through one of their most notable strikes. George loved hunting, fishing, his friends, and most of all his family. He especially enjoyed "the little ones."

George was preceded in death by his parents; his wife: Mary in 1996; his son: Joseph in 2008; siblings: Harold Klocow, Helen Gardner, Hazel Strand, Doris Spiering, Gertrude Hahn, and one great-grandchild: Elliott Wills.
To order memorial trees or send flowers to the family in memory of George David Klocow, please visit our flower store.