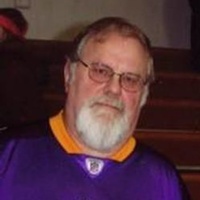 Memorial service will be held at 11:00 am on Thursday, August 1, 2013 at St. Peter Funeral Home with visitation one hour prior.

David was born on April 4, 1955 in Marshall MN to Hector and Marjorie DePyper. On January 21, 1978 he was united in marriage to Debra Wilmes in Mankato. Prior to his illness, he enjoyed working at the St. Peter Food Co-op. His joys in life were fishing, watching the Vikings, and spending time with family.