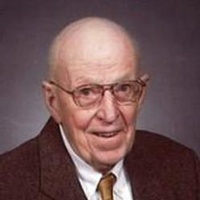 Pastor John Stanley Benson of St. Peter died at Benedictine Living Community on August 15, 2013, of complications of leukemia. His funeral service will be held at First Lutheran Church in St. Peter on Sunday, August 18, at 11 a.m., with burial at Resurrection Cemetery following the service. Lunch will be at the church following the burial.

In lieu of flowers, the family prefers memorials be given to the Stan and Marie Benson Endowment Fund for scholarships at Gustavus Adolphus College and the Building on Faith to Love and Serve Appeal at First Lutheran Church.

John Stanley Benson was born January 11, 1928, in Omaha, Nebraska, to Pastor John S. and Doris Oline Benson. Being the son of a pastor, Stan and his younger brother, "Bud' Sterling O. Benson, grew up in parsonages in Ault, Colorado; Aitken, Minnesota; and Rosholt, South Dakota. His mother died in 1943 when he was 15. Ruth Bonander Benson became his stepmother in 1946. His father died in 1982 and Ruth in 1983.

He attended West Central School of Agriculture in Morris, Minnesota, graduating in 1946 and going directly into military service. Part of that service he spent in the Philippines where he felt a call to work in overseas church service. Stan attended Gustavus Adolphus College in St. Peter, Minnesota, graduating in 1951. Encouraged by professors George Hall and Richard Reusch, he and his classmate, Clarence Budke, went overseas to teach sponsored by the Augustana Lutheran Church. Initially they went to British North Borneo, now Sabah, Malaysia, where Stan taught at Lokyuk School in Jesselton, now Kota Kinabalu, for two years, after which they were transferred to their field of choice Tanganyika, East Africa.

Stans first work in Tanganyika was accompanying his uncle, Dr. Richard Reusch, in work among the Maasai people, placing missionary families in stations at Loliondo, Naberera, and Karatu, before Dr. Reusch retired. In 1956, Stan finished his first term of missionary service and returned to the United States where he was married on August 4, 1956, to Marie Schafer. Their first home was in Rock Island, Illinois, as he studied for three years at Augustana Theological Seminary.

He was ordained June 21, 1959 in the Augustana Lutheran assembly at Hartford, Connecticut. Stans call was back to Tanganyika to serve at Loliondo. Son, John Steven, was born August 19, 1958. Johns first birthday was in Cape Town, South Africa, as they sailed on a freighter ship to return to Tanganyika. The next year, October 29, 1960, Todd David was born. On July 24, 1965, Jeffrey Daniel was born, their third son. Both were born in Arusha, Tanzania.

Stan dealt with leukemia for five years, as well other health problems.

Surviving him are his wife of 57 years, Marie; son, John, with wife, Cindy, and children, Claire and Sam, of Moorhead, MN; son, Todd, with wife, Betsy, and children, Luke and Ellie, of Washington, DC; son, Jeff, with wife, Barb, and children Carlee, Joel, and Natalie of Seoul, South Korea; and brother Sterling "Bud', with wife, Louise, of Lindsborg, Kansas.
To order memorial trees or send flowers to the family in memory of John Stanley Benson, please visit our flower store.