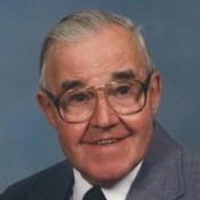 Joe Biederman, 96, of St Peter passed away Monday, August 26, 2013. A service will be held at Union Presbyterian Church, St. Peter on Friday, August 30 at 2:00 with visitation one hour prior at the church. St. Peter Funeral Home is assisting the family with arrangements.

Brainerd, and several nieces and nephews.

Joe served his country during World War II as a flight mechanic and had many fond memories of his ability to get planes ready. He was a talented furniture builder and upholsterer, and worked in the carpenter shop at Gustavus after many years in private business. He was a kind, sweet man who was loved by all who knew him.

In lieu of flowers, memorials preferred to the American Cancer Society toward breast cancer research or charity of the donors choice.
To order memorial trees or send flowers to the family in memory of Carl Joseph Biederman, please visit our flower store.