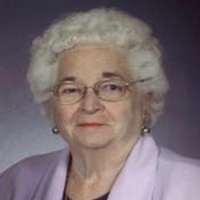 Mass of Christian Burial will be held at 10:00 a.m., Saturday, September 7, 2013 at Church of the Nativity in Cleveland. Burial will be in Calvary Cemetery, Cleveland. Visitation will be from 4-7 p.m., Friday at St. Peter Funeral Home - Klein Chapel and will continue one hour prior to the service at the church on Saturday.

Virginia was born on May 20, 1927 in LeSueur County to Elmo Frances and Eldora (Flowers) Davis. She is a graduate of Cleveland High School. She met Anthony "Tony" Beer Jr., while roller-skating at the Cleveland Township Hall and they were united in marriage on July 9, 1947 at the Church of the Nativity. They were lifetime residents of Cleveland.

Virginia worked for Cargill Seed Company both in the field and the office. She was then the Cleveland Telephone operator until automated switchboards were put in place. She had a 31 year career at ADC Communication/ ONAN as a line supervisor. She and Tony were married for 56 years and they enjoyed the 14 winters they spent in Texas playing nickel Bingo and playing cards with their many friends, especially at the Montgomery Senior Center. They were members of the Heartland Sams camping club and recently Virginia received her 60 year certificate of continuous membership from the American Legion Post 207 Auxiliary.

She was preceded in death by husband Tony in 2007; son, Gerald Beer in 1982; Brother Ervin Davis and sisters: Catherine Schwartz, Shirley Schwartz and Mamie Sorgratz.
To order memorial trees or send flowers to the family in memory of Virginia Mae Beer, please visit our flower store.