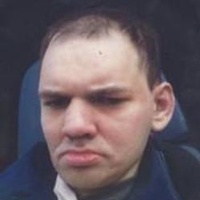 Mass of Christian Burial will be 11:00 a.m., Tuesday, October 15, 2013, at the Church of St. Peter, with Rev. Todd Petersen officiating. Interment will be in Calvary Cemetery in Mankato. Visitation will be 4-7 p.m. on Monday at the church, with a 7 p.m. Prayer Service. Visitation continues one hour prior to the service at the church. St. Peter Funeral Home handled the arrangements. Memorials may be given to the Epilepsy Foundation.

Edward was born on November 6, 1961, in Mankato. He was the son of Franklin and Margaret (Bartsch) Klaseus. Edward was known for his love of stuffed animals.

He was preceded in death by his father, Franklin in 1974 and step-father, Melvin Deutsch in 1997.
To order memorial trees or send flowers to the family in memory of Edward J Klaseus, please visit our flower store.