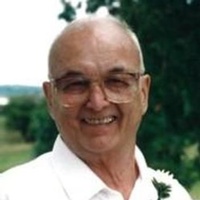 Memorial Mass will be held at 10:30 on Thursday, July 12, 2012 at the Church of St. Peter in St. Peter with burial at Calvary Cemetery, St. Peter. Visitation will be one hour prior to the service at the church. St. Peter Funeral Home is assisting the family with arrangements.

Clifford was born on May 7, 1922 in St. Peter to Adolph C. and Ruby E. (Swensk) Mollert. He attended St. Peter High School, graduating in 1940. Started Cliff Mollert and his Band, followed by The Collegians, The Bob Burt Trio, and the St. Marys mens choir polka mass. He was passionate about drumming his entire life. June 2, 1946 he was united in marriage to Helen Theresa Hoffman. After high school, he worked for Ritt Electric in St. Peter and continued working with them for 11 years. Clifford then purchased and operated the Southside Shell Gas Station, which later became the Southside DX. During his time there, he was one of the first repair shops to have a diagnostic machine. In 1976, he began Shanaska Drummer Antiques on the Century Farmm. He continued in that business until retiring in 1999. While working with antiques, he also created lighting that has been sold in all 50 states as well as 5 countries. Clifford was a member of the Church of St. Peter Knights of Columbus, clerk of Kasota Township as well as several antique clubs. He enjoyed family, traveling, drumming, playing in several bands as well as Polka Masses for the church. He was good natured, a gentle giant and always had a smile, AMEN!

He was preceded in death by a daughter, Mary Ellen Mollert-Wenzel in 2005 and a sister, Lorraine in 1942.
To order memorial trees or send flowers to the family in memory of Clifford Mollert, please visit our flower store.