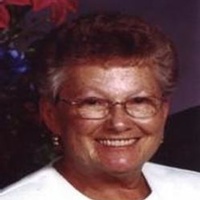 A memorial service will be held at 11 a.m. Tuesday, October 18, 2011 at First Lutheran Church in St. Peter, with Rev. Alan Bray officiating. Visitation will be held one hour prior to the service at church. Burial will be in Resurrection Cemetery in St. Peter. Saint Peter Funeral Home is assisting the family.

Kathryn Bernice Swedberg was born in January 31, 1928 to Knute and Ragna (Iverson) Wick in St. Paul, MN. She graduated from Murray High School in St. Paul in 1945. She worked as a secretary to the president of Security State Bank in St. Paul. Kathy married Bob Swedberg on June 18, 1949 at Hope Lutheran Church in Minneapolis. Following Bob's graduation in 1951, they moved to Mankato and started their family. Four years later, the family moved to St. Peter until present day. It was here they founded a drug store and worked together until retiring in 1987.

Kathy and Bob enjoyed traveling together. They traveled to most of the United States, Canada, and other faraway places. During these journeys, Kathy enjoyed creating trip diaries to accompany their beautiful photos. They enjoyed many winters in sunny Florida.

Kathy loved spending time with her family. She had eleven beautiful, talented grandkids who she adored. She was an avid Scrabble player " and she played a mean game of cards! Going out for meals with friends meant a lot to her also. She was an excellent gardener and her yard was a colorful testament to that.

She was preceded in death by her sister, Evelyn.
To order memorial trees or send flowers to the family in memory of Kathryn B Swedberg, please visit our flower store.