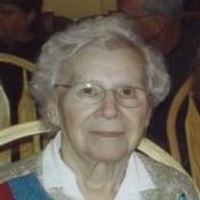 Funeral Service will be held at 10:30 a.m., Friday, November 18 at the Church of Christ, Cleveland, with Rev. John Kester officiating. Burial will be in Savidge Lake Cemetery, rural Cleveland. Visitation will be from 4-7 p.m., Thursday at St. Peter Funeral Home and will continue one hour before service at the church on Friday.

Loretta was born on January 28, 1927 in Dodgeville WI to Lawrence and Laura (Hitchcock) Hand. She was then raised in St. Paul and was united in marriage to Kenneth C. Flowers on September 16, 1944 in St. Paul. She was an active member of the United Methodist Church in Cleveland as part of the Women's Christian Society, Sunday School, and Church Choir. Loretta enjoyed gardening and her gladiolas, baking apple pies, word puzzles, cards (Solitaire, Pfeffer and 500) and shopping trips with friends. She dearly loved her children, grandchildren and great-grandchildren.

She was preceded in death by Kenneth in 2009; parents: Lawrence Hand and Laura Hitchcock Brownell; sister and brother-in-law Dorothy (Tom) Mulvaney; granddaughter Laurie Flowers; and son-in-law Dennis Holicky.
To order memorial trees or send flowers to the family in memory of Loretta E Flowers, please visit our flower store.