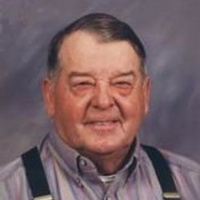 The funeral service will be held at 11:00 am on Thursday December 22, 2011 at Our Savior's Lutheran Church in Cleveland with Rev. Shelly Olson officiating. Burial will be at Resurrection Cemetery, St. Peter. Visitation will be from 9:30 am until the start of the service at the church.

Les was born on June 14, 1925 to George B. and Josephine C. (Hanson) Anderson in the big brick house on the sand prairie (rural St. Peter). He farmed his entire life and enjoyed watching crops grow as the seasons passed and caring for the cows and pigs. He especially enjoyed watching the wildlife as he crossed the fields or from the barn door looking at the lake. He was a member of Our Savior's Lutheran Church in Cleveland and a 4-H leader for many years. Later in life, he enjoyed wood working and traveling.

He was preceded in death by an infant son Robert and four sisters.

Memorials may be directed toward the church. St. Peter Funeral Home " Klein Chapel is assisting the family with arrangements
To order memorial trees or send flowers to the family in memory of Leslie Anderson, please visit our flower store.