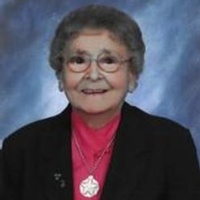 Memorial Service will be held at 10:30 a.m., Saturday, March 26, 2011 at Trinity Lutheran Church with Rev. Charles Christensen officiating. Visitation will be one hour prior to the service. Burial will be in Resurrection Cemetery in St. Peter. St. Peter Funeral Home assisted the family with arrangements.

Hildur Miriam Christine was born December 15, 1907 to Otto H. and Amanda (Aronson) Anderson in Oshawa Township, Nicollet County. She attended Grade School District 27 in Oshawa. Hildur was confirmed at the First Lutheran Church in 1922. In 1926, she graduated from St. Peter High School. Hildur received her teaching degree at Gustavus Adolphus College in 1930. She taught English and Latin and was the director of plays in Granada for 5 years, Osseo High School for 2 years, Lamberton for 7 years and St. Peter High School for 16 years. Hildur was the parish worker at Gloria Dei Church in St. Paul from 1945-1950. In 1950, she was united in marriage to Einar Swenson at Trinity Lutheran Church. Hildur was a homemaker until Einar's death when she became a farmerette for over 25 years. Hildur was involved in many activities including: 10 years as Sunday School Superintendent for Trinity, President of ELCW Trinity, 4 years as Trinity Lutheran Board Member, Trinity Couples Club, Trinity Prayer Chain, Circle Member of Trinity, Trinity Visitation, Gustavus Alumni Class Agent of 1930, St. Peter Literary Club, Charter Member of Gustavus Library Association and Friends of the Linneaus Arboretum, program chairman of AARP, Hospital Auxiliary, Trinity Mission member and for 50 years plus, sang in the Trinity Choir. Not only was Hildur very active with her church and Gustavus, but also took time to travel. She traveled to the Bahamas, Ozarks, most of the United States, Hawaii, Holy Land, European Countries and was able to go to Sweden 7 times. Hildur attended several Elderhostels.

Hildur is survived by her sisters: Dorothy Houser of Crystal Lake, IL and Lois (Dr. Kenneth D.) Quist of Atlanta, GA and many nieces and nephews.

Hildur was preceded in death by her husband, Einar; brother, Arndt Anderson; and sisters: Ruth Anderson and Louise Thompson.
To order memorial trees or send flowers to the family in memory of Hildur M C Swenson, please visit our flower store.