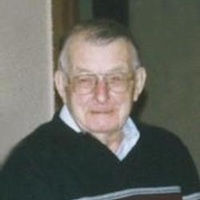 Funeral Service will be at 11:00 a.m., Saturday, May 14, 2011 at First Lutheran Church with Rev. Don Holmstrom officiating. Burial with military honors will be in Resurrection Cemetery. Visitation will be held one hour prior to the service at the church. Saint Peter Funeral Home is assisting the family with arrangements.

James Odean was born November 28, 1911 to Tom and Christine (Brue) Sandland in Clearbrook, MN. On December 2, 1939, Jim was united in marriage to Bernice Johnson in St. Peter, MN. They were blessed with four children. From 1943 until 1945, Jim served in the United States Army during World War II. He ran the Norseland Meat Locker with his brother-in-law and co-owned the meat market in Fairfax, before becoming a baker for 16 years at the St. Peter State Hospital. He baked the best homemade bread and cinnamon rolls. After retiring in 1976, Jim worked 10 years as security for Gustavus Adolphus College. He was a strong and patient man who believed family was important.

Jim was preceded in death by his parents; wife Bernice Sandland in 2002; son, Dennis Sandland in 2011; two great-grandchildren: Hannah and Michael Kopischke; two brothers: Lester and Rueben Sandland; and sister, Ruby Baumann.
To order memorial trees or send flowers to the family in memory of James Odean Sandland, please visit our flower store.