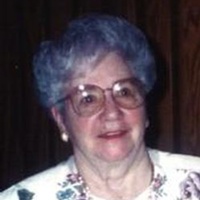 Funeral service will be held at 10:00 am on Friday, May 20, 2011 at St. Peter Funeral Home " Klein Chapel. Visitation will be from 4-6 pm on Thursday at the funeral home and will continue one hour prior to the service. Burial will be at Ft. Snelling National Cemetery in Minneapolis.

Clara was born on December 9, 1922 in Belle Plaine, MN to John and Myrtle Soller. She was raised and school in Le Sueur. Clara was united in marriage to Edmund P. Flowers on May 1, 1941 . They made their home in Kasota where Clara was the bookkeeper for Edmund at St. Peter Well. They sold the business in 1978, and enjoyed their time together until Edmund's death in 1985.

She was preceded in death by her parents, husband, son: Arno, brother Roger; sister: Catherine, and son in law:James Volk.
To order memorial trees or send flowers to the family in memory of Clara M Flowers, please visit our flower store.